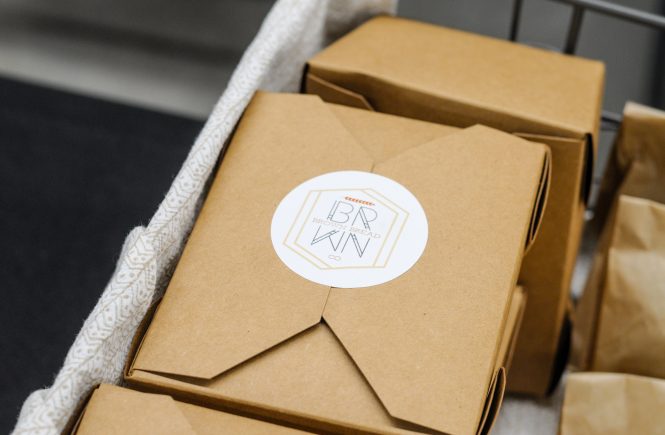 I first heard about Brown Bread back in my early Baltimore blogging days. I was browsing Baltimore based Instagram handles and a friend of mine followed Brown Bread. Whoever that friend was THANK YOU. It was YOU who got me to drool over a picture Brown Bread’s Vietnemese coffee biscuits. I remember turning my chair around to face my cube mate, Shannon (yeah I was checking out my phone at work haha), shoving the picture in her face, and Shannon telling me how we needed to get those biscuits ASAP. At that time, Jess, the owner of Brown Bread, only made the biscuits if you filled out an order form sent to you via email.  I remember reaching out to her and writing her a message on how to obtain the biscuits. She told me I could email her what I wanted or to go to the farmers’ market that she’d be at in the summer.

That interaction above happened at the end of May — two days before I posted my third blog post about Ceremony Coffee in Harbor East. It’s funny to look back at that moment and compare it to now. I never met Jess at that time — never interacted with her in person, and it took me five months to finally get my ass over to where she was selling those biscuits. Now that I’ve met Jess, I can actually say she is such a chill, down to earth, goal driven woman with a kind heart. I love interacting with her because I can see how much she genuinely cares about her business, the quality of her biscuits, and her customers. When I was there this past Sunday, I could tell her customers really liked her too. She has regulars that go there almost every Sunday. They know each other’s names and know what’s going on with each other’s lives. 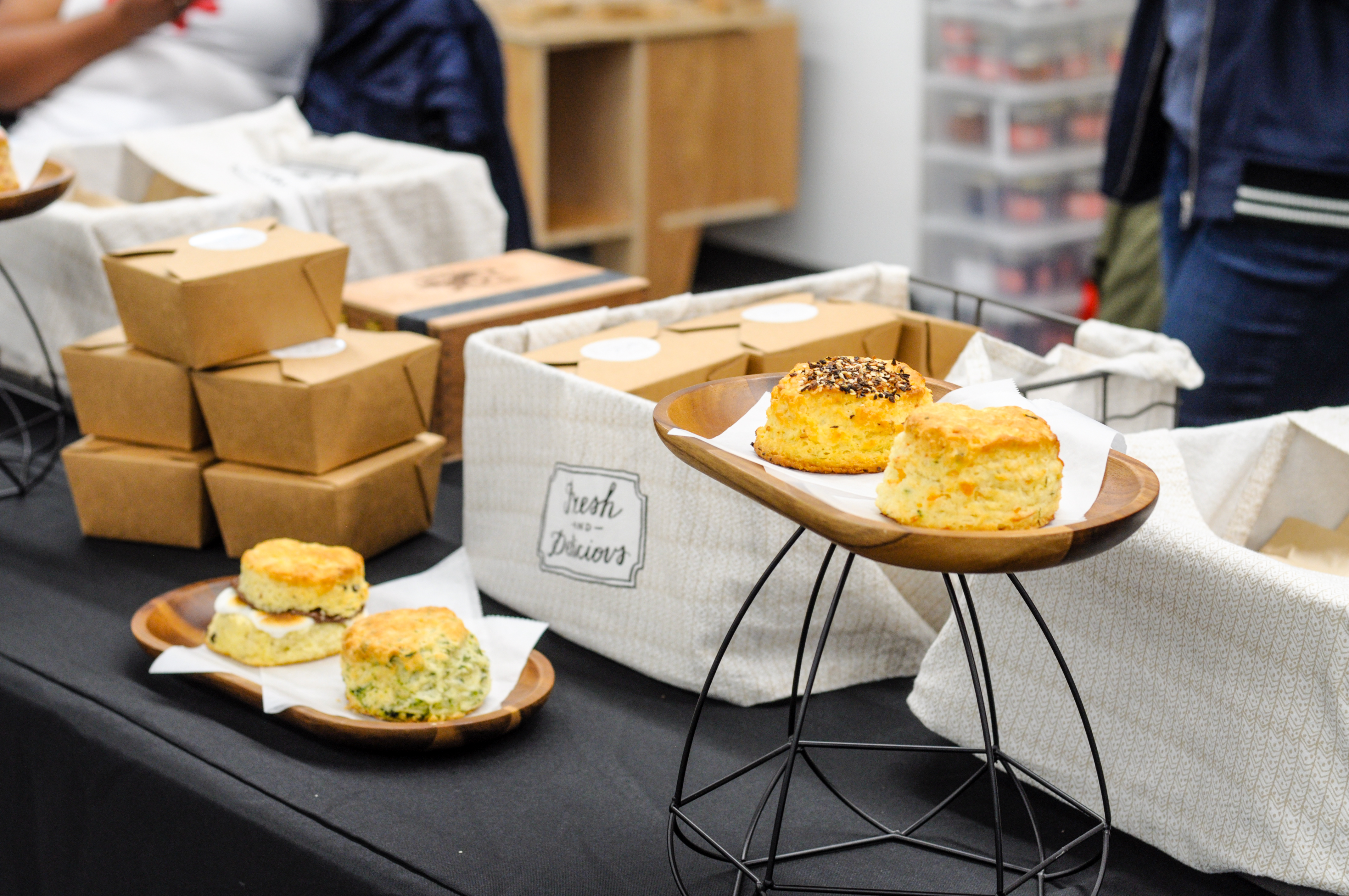 To set the record straight, Jess does not call herself a baker. She is a social worker with a joy-driven hustle that explores ways to merge community spaces with the ultimate comfort food… which are her biscuits.

Jess started off making biscuits as a hobby and for fun. She wanted some type of creative flow happening in her life to distract herself from all the crap that was (still is) happening in the world. She would post pictures of her biscuits she made on her Instagram. They looked so amazing and so creative that people began to ask if they could buy her biscuits. From there, her side hustle began whipping up made-to-order biscuits and then eventually selling them at the Greenmount West Farmers’ Market, aka Grow Market. She picked Grow Market not only was it just a couple of blocks from where she lives, but it’s a Black-run farmers’ market in a neighborhood classified as a food desert. 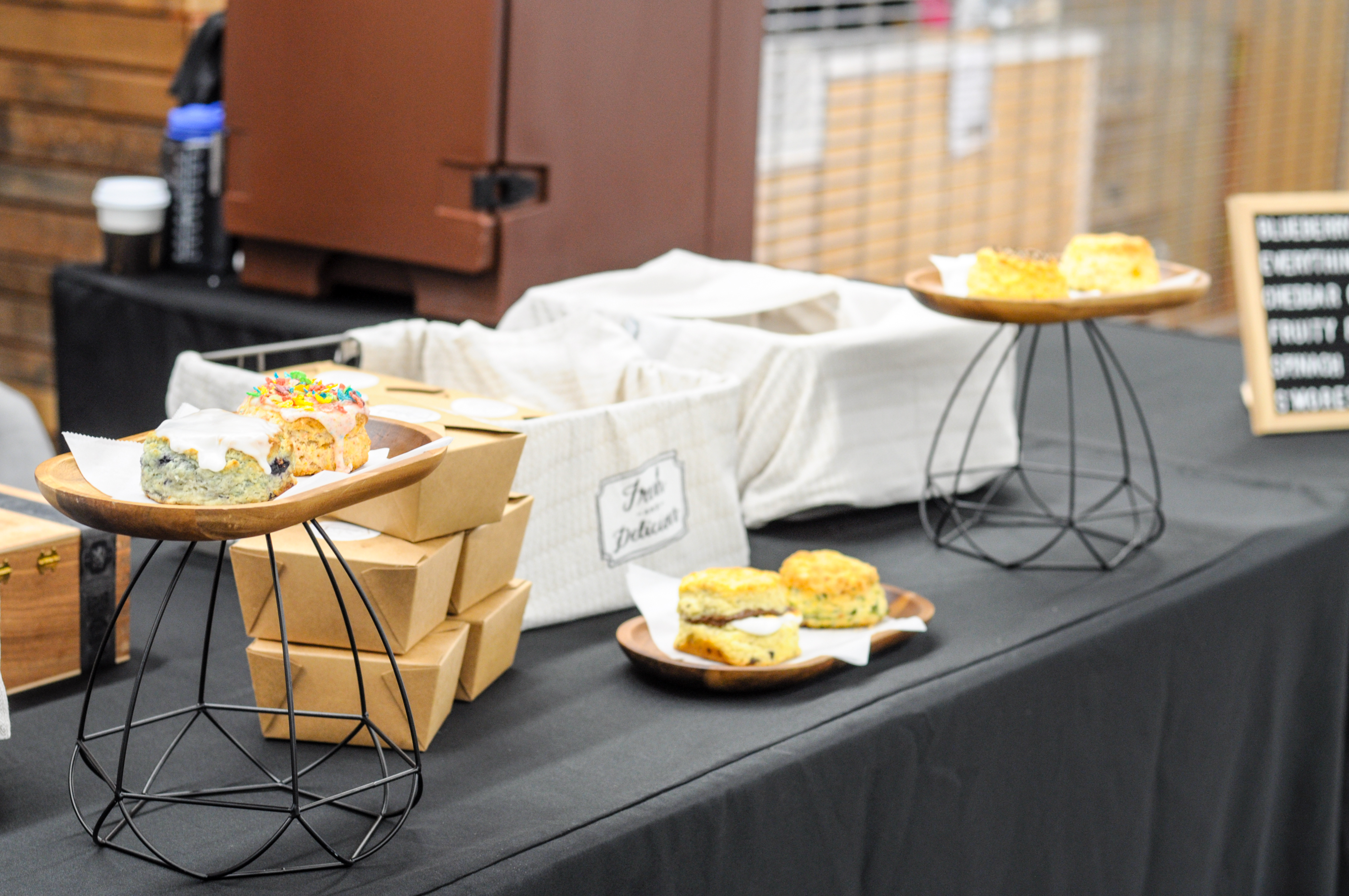 She also wanted to expose her community and Black folks to Instagram worthy food, and gawd damn, her food is Instagram worthy. Granted, she isn’t selling kale, or doing anything in particular to bend the curve of Black health statistics in Baltimore, but she believes that there is a good in being able to provide quality products that were baked that morning with local dairy, fresh blueberries, and real lemon zest. 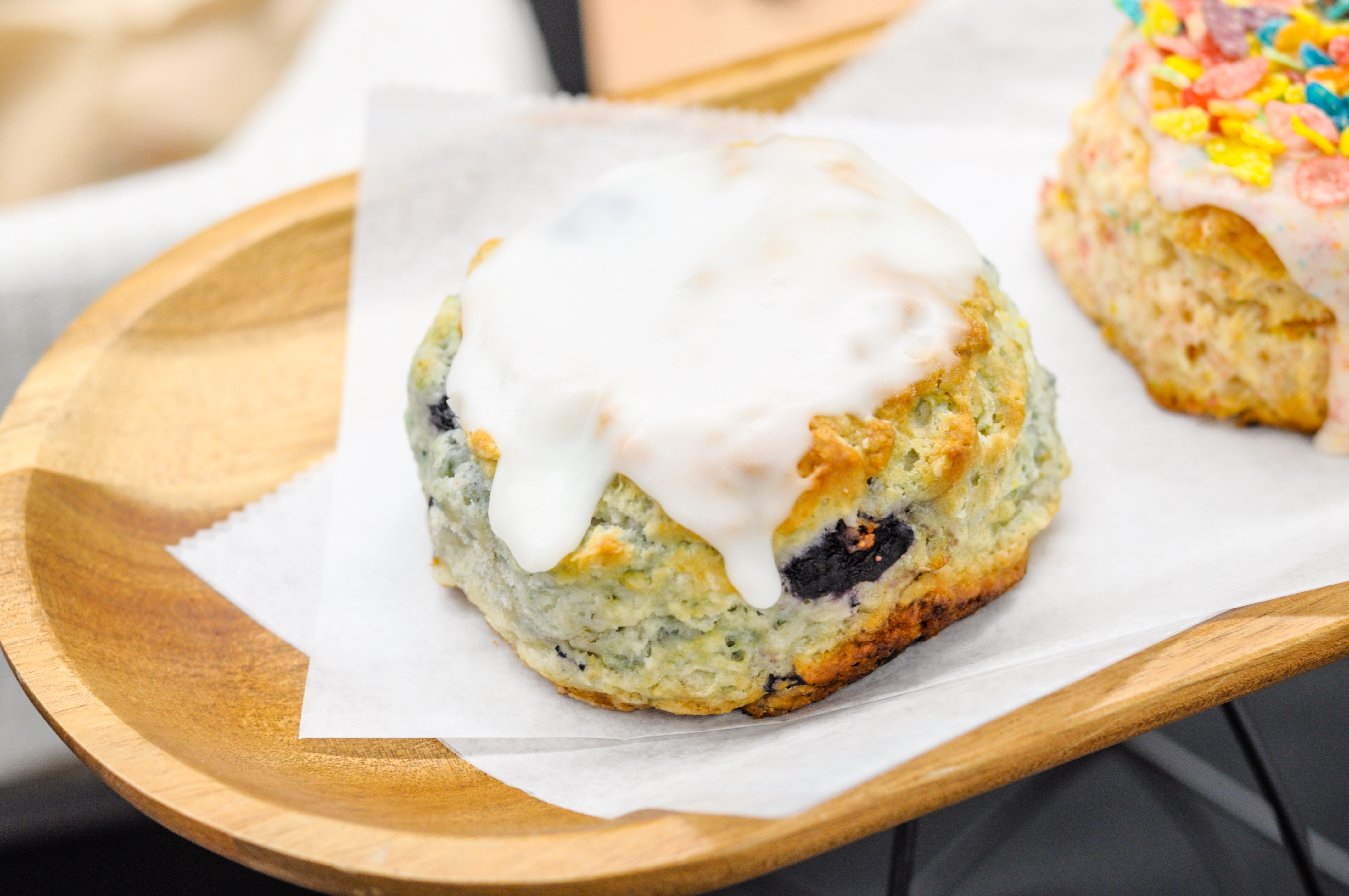 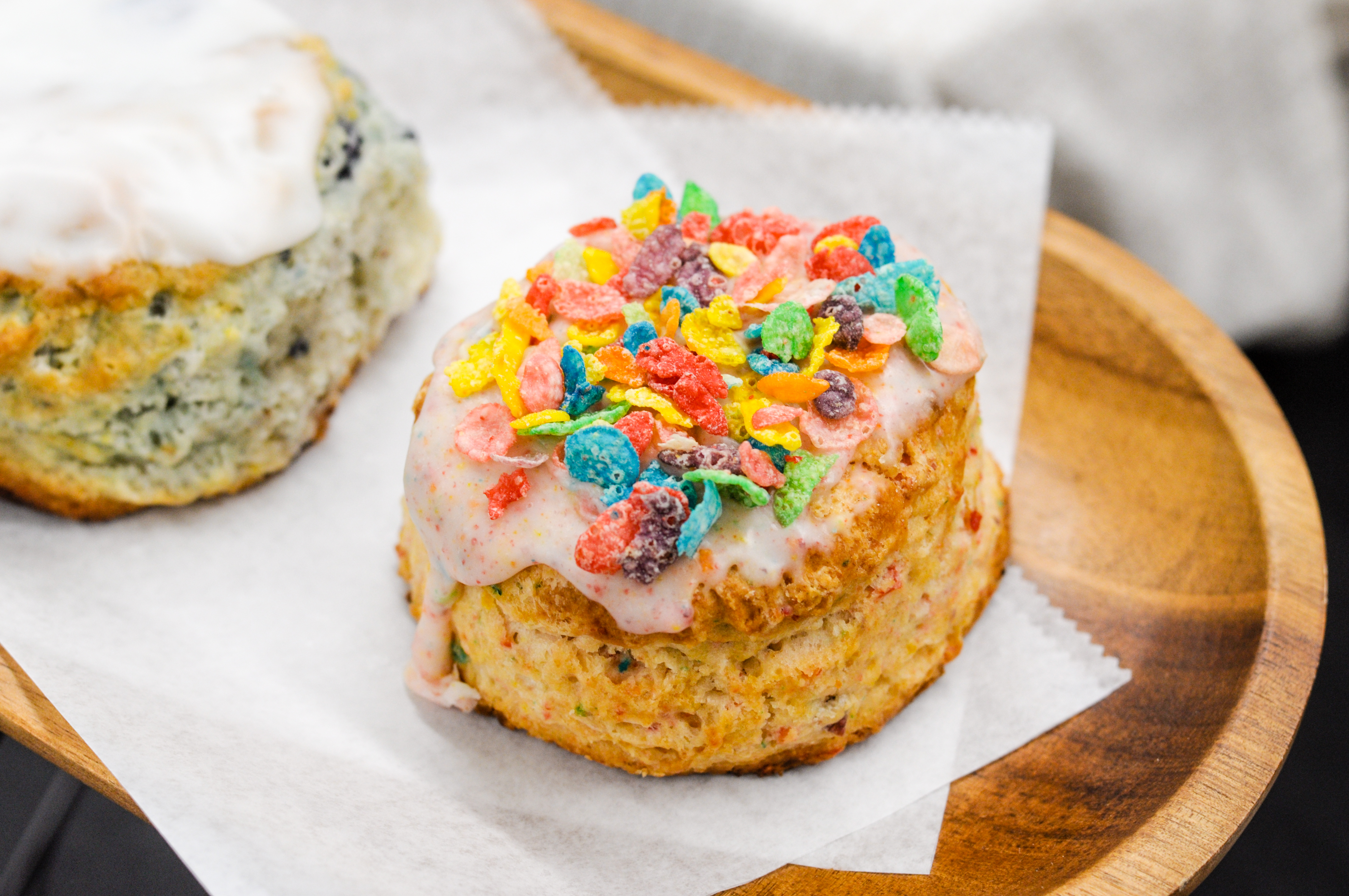 At first, she called her business ‘self rising’ because, ya know, bread rises, but that didn’t really really fit well with her. She ended up changing the name a couple of days later to what you now know as Brown Bread. I asked Jess where she got that name. It was pretty straight forward. She’s brown and she makes bread. I liked it!

I also asked Jess how she came up with her logo, and I gotta say, it’s pretty damn creative. Although Jess was raised outside of Detroit, she’s the daughter of a Nigerian immigrant. Her Yoruba name, Oyinkan, originates from the Yoruba tribe in Nigeria. Oyin, when translated to English, means “honey”. Her family calls her by her nickname Oni, which means a “drop of honey” or “a bit of honey”. She wanted to incorporate that into her logo, hence the hexagon shape of Brown Bread. But wait… there is another shape of a hexagon stacked on top of the other. Why two? It’s because there are many layers to Jess 😉 Not sure what you think, but when I heard that, I thought that was forreal deep. 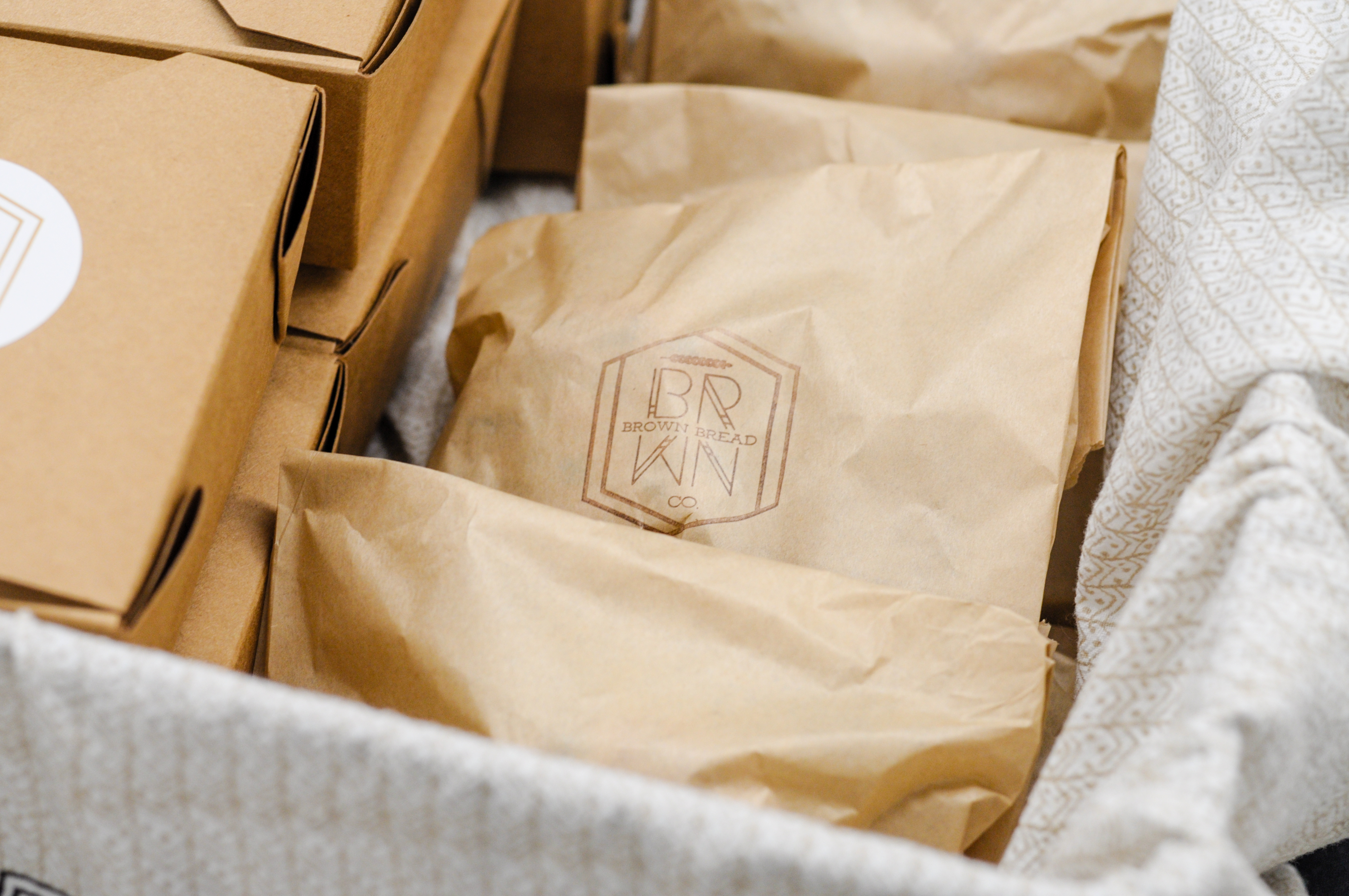 Jess changes up her biscuit game every time she’s selling at the farmers’ market. Each Sunday, you’re treated to savory and sugary type biscuits. The Sunday I went, her line up showcased three savory biscuits and three sugary/dessert biscuits. I bought each one, ate each one, and they were all tasty!! All the biscuits were not dry and deliciously buttery. You can taste each individual ingredient and appreciate how they all blend and balance together. 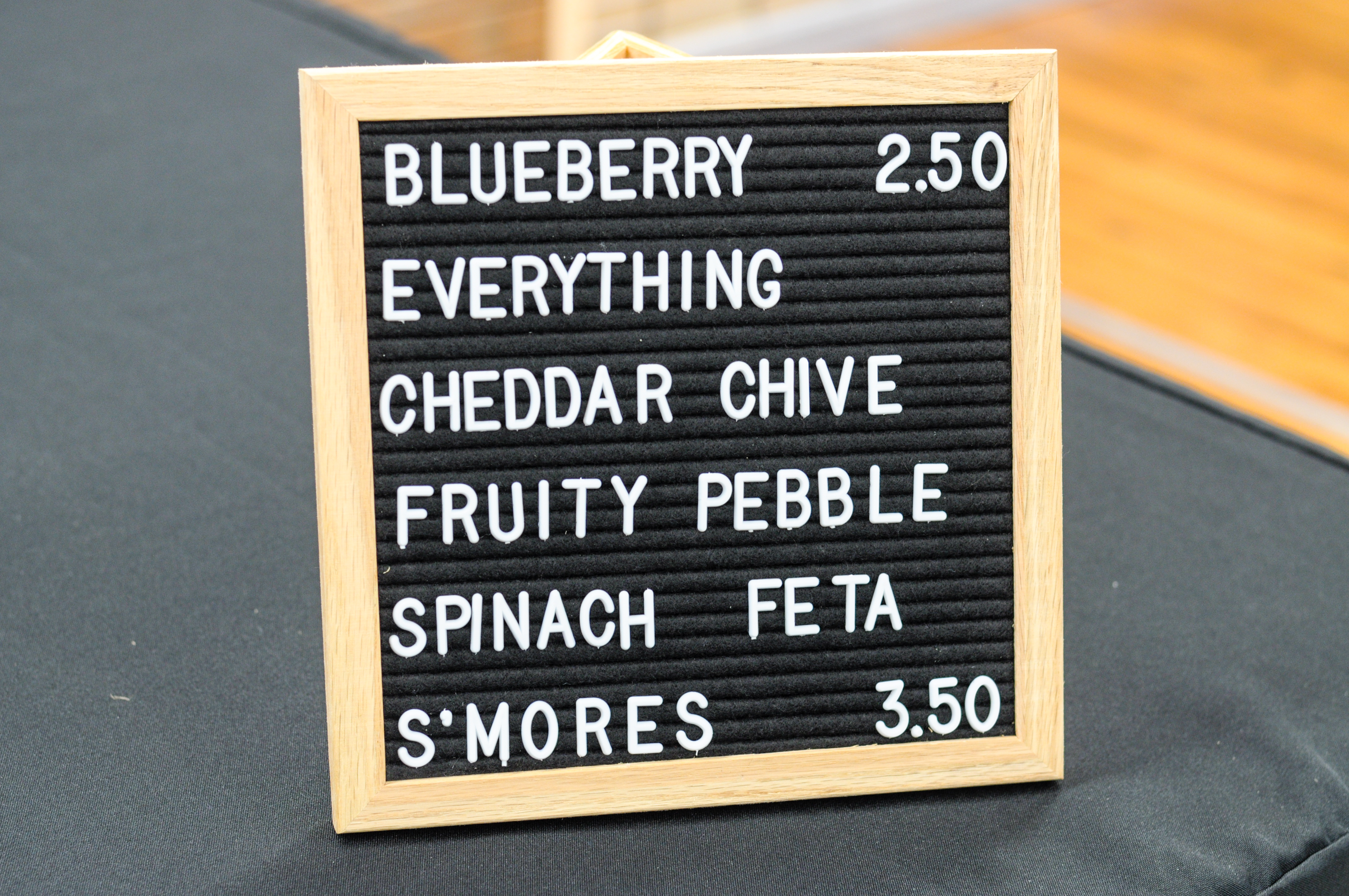 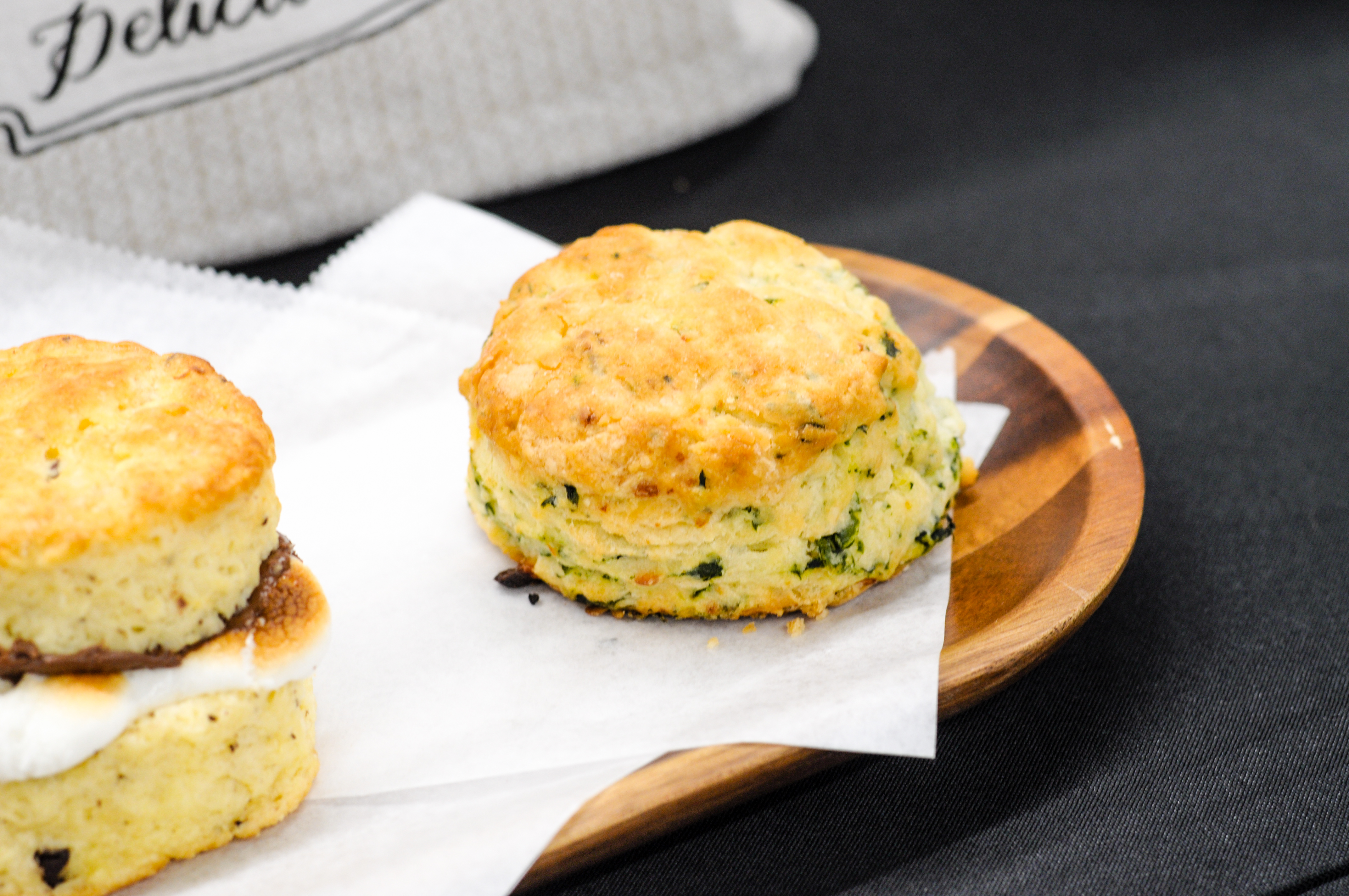 All her biscuits are made the morning of. She preps the ingredients the night before and goes to sleep around 8 or 9 PM. She’ll then get up at 3 AM and start baking the biscuits. Honestly, I think she’s spoiling us with all these fresh biscuits, but I ain’t complaining! 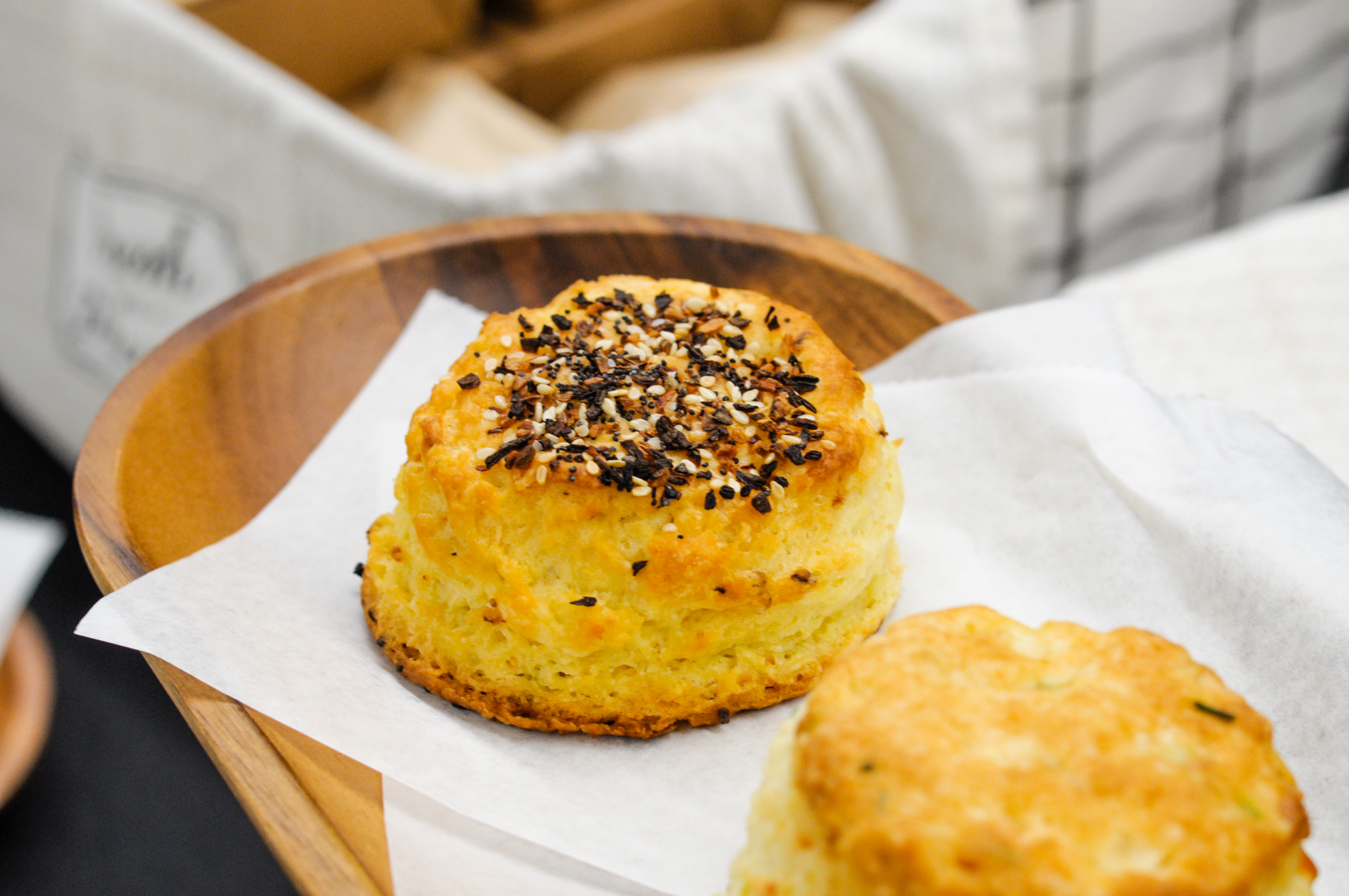 So I bet you all are wondering what makes these buttery, flavorful biscuits special (other than their awesome flavors). Her biscuits do not derive from some secret recipe her grandma made. She actually was raised on biscuits that you can pop out of a tube. It’s not that southern nostalgia because, as you already know, Jess lived outside of Detroit growing up. Jess fell in love with the process of mastering the technique of a recipe that only has three ingredients (unbleached flour, buttermilk, and butter in case you don’t know what makes a biscuit haha). She gets her winter, wheat flour shipped from outside of Maryland and her buttermilk from a local farm. Her butter struggle was real. She spent a whole year of trying to find the right grade of butter, which is now incorporated in her recipe. 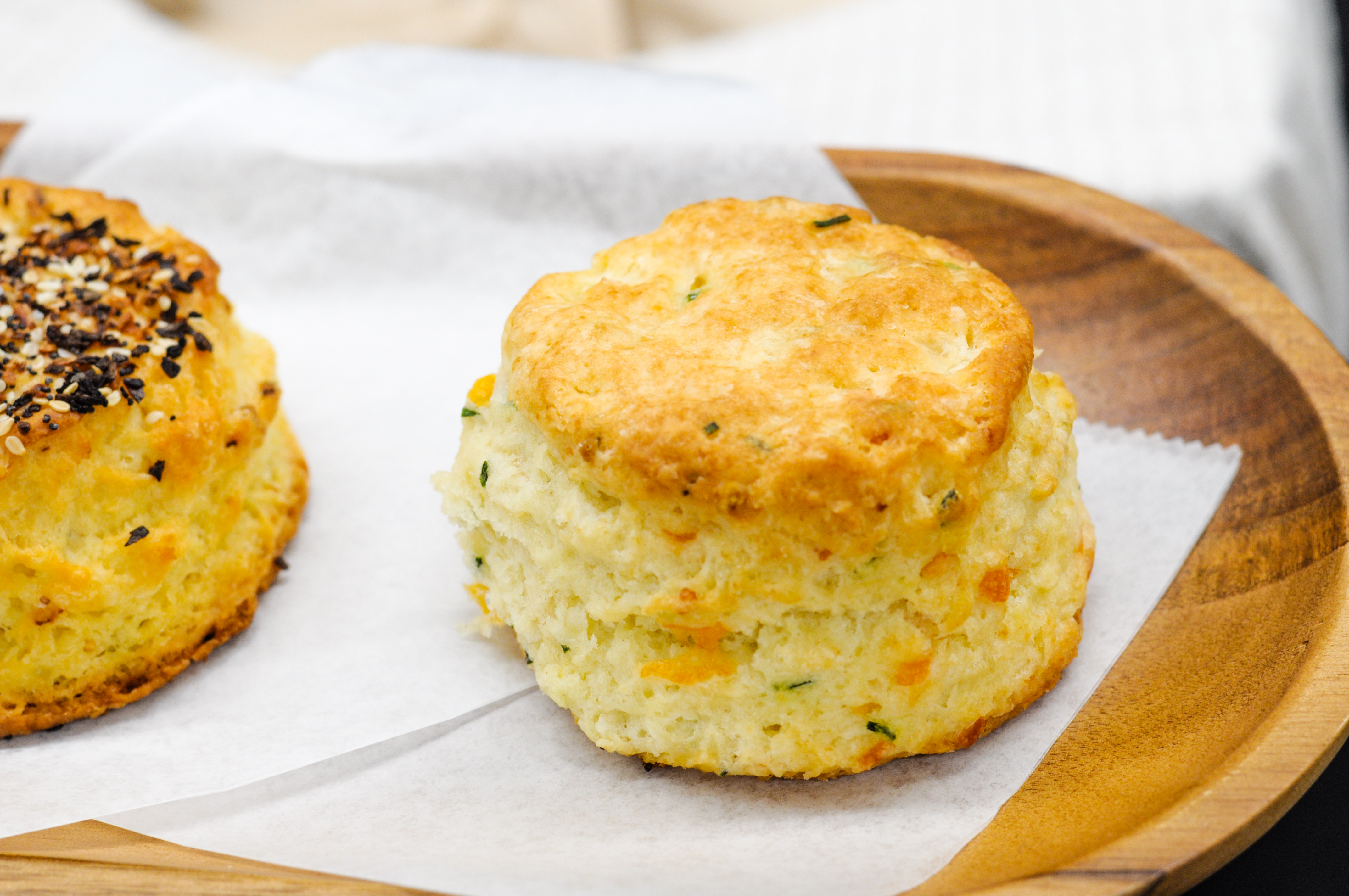 I asked Jess how she came up with her flavors. She told me she gets her inspiration from everywhere. For example, if she eats something really good that she likes, she’ll think whether or not a biscuit could be made out of that flavor. Most of her flavor ideas come from ice creams, donuts, and cupcakes. She likes going off the beaten path with these flavors, which she also calls her ‘signature flavors’. And although she has these awesome creative biscuits, she also makes classic biscuits too. 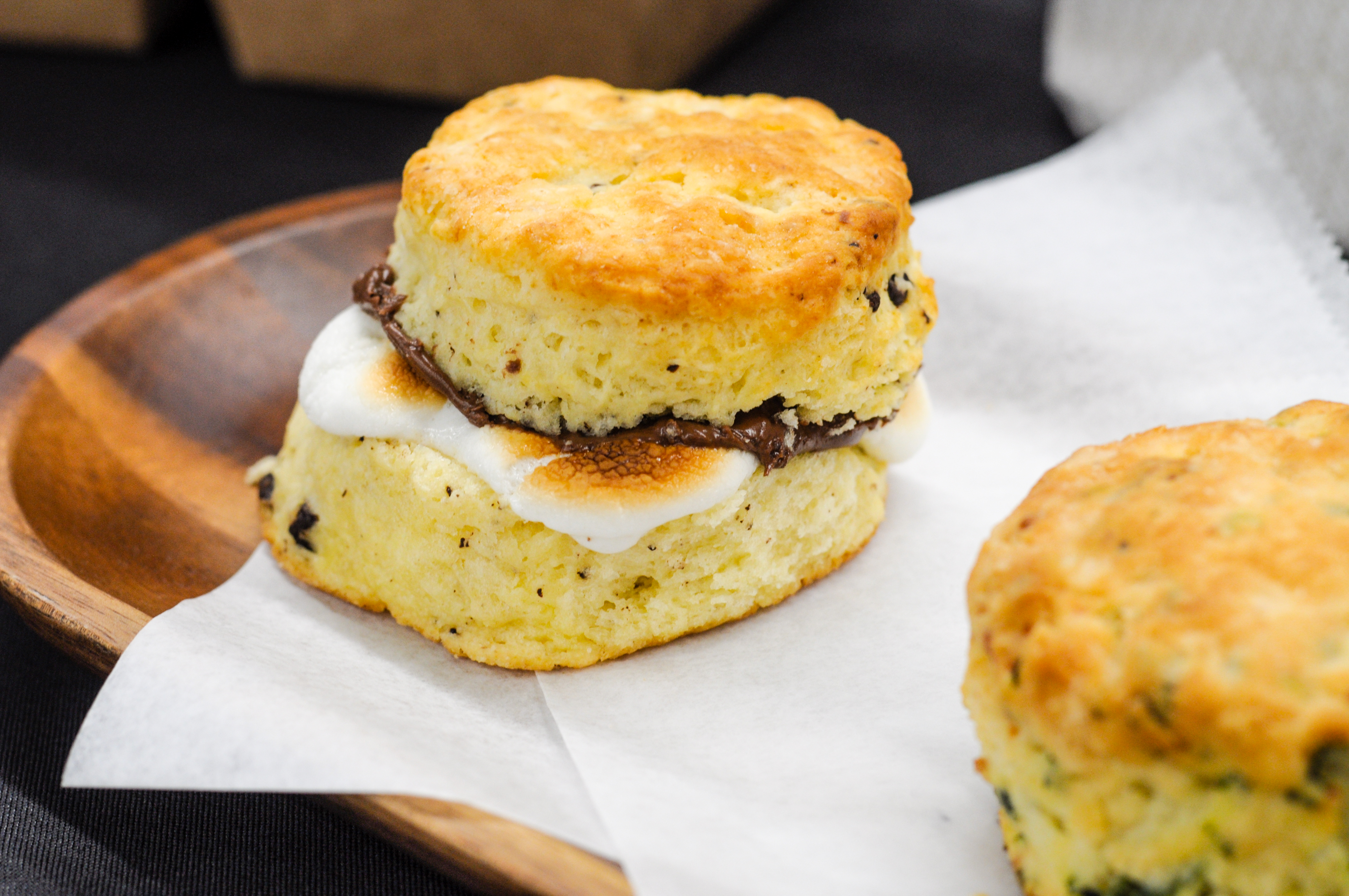 If you are dying to try these biscuits (which I hope you are), fear not! Although you won’t be able to catch Jess and her lovely biscuits at the Grow Market during the winter time, you can catch them at an upcoming event! Brown Bread will be at Impact Hub on Thursday, November 9th, 2017 from 11am – 2pm. So far, that’s the only event set in stone for Jess, but she reassured me that she has other pop-up events and collabs coming up that are in the works. Follow Brown Bread on Instagram for updates! Or you can just email her at thatbrownbread@gmail.com to get some biscuits.

In the future, Jess plans to sell breakfast sandwiches, biscuit-style. Chicken and waffle biscuit sammiches anyone? She has a lot of ideas in her mind: biscuit and whiskey pairings, biscuit and beer pairings, incorporating her social work job with taking care of kids… the possibilities are endless!

FYI, if you want to order these biscuits in bulk, Jess can make that happen. She takes large orders with a one dozen minimum… just sayin (brunch partaaayyy!!!). 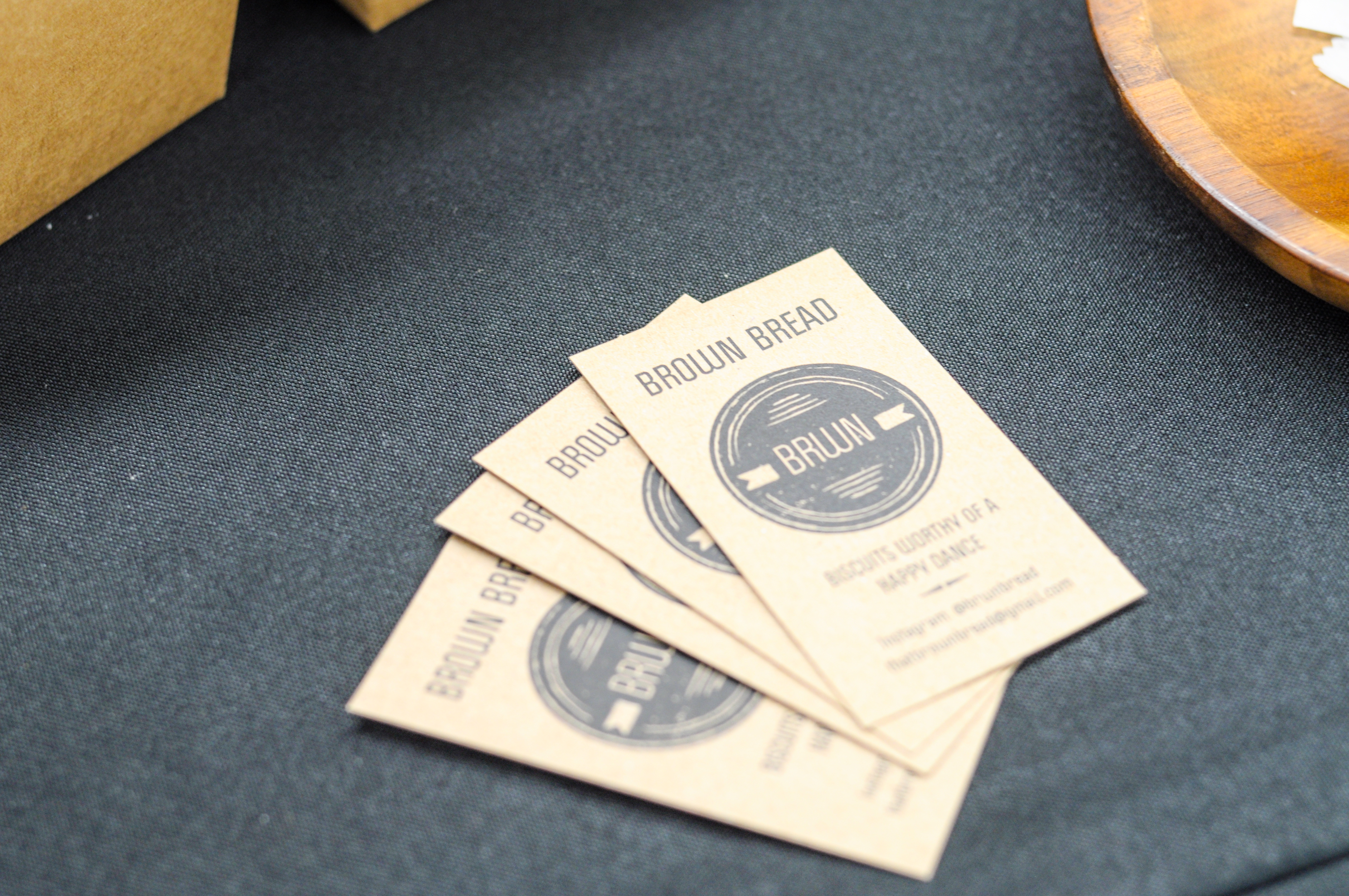 Has anyone tried Brown Bread or met Jess before? If you’ve met Jess, isn’t she freakin fanastic? Would love to know your story!