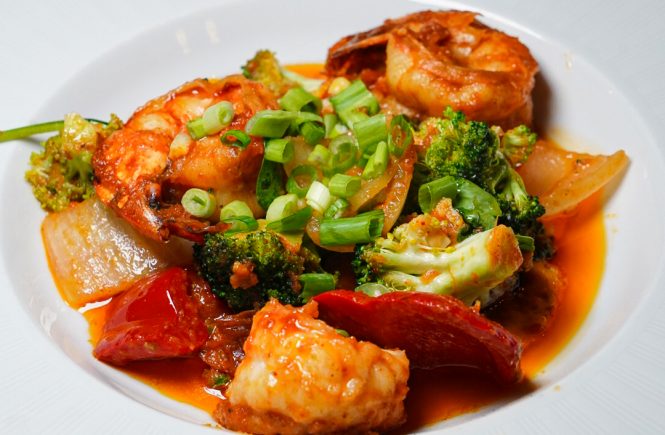 After hearing Peerce’s, an upscale Indian restaurant located Phoenix, MD, won Baltimore Magazine’s Best of Baltimore 2020, my friends (Rachel from @liketheteaeats and Linda from @onthemoveforfood) and I made a dinner reservations at Peerce’s. We asked to be seated outside when making the reservation. However, when we got there, we were led to the tables inside due to the restaurant not having anymore outside availability for our party of 6 at 5:45pm. Luckily enough, the doors were super wide open (they have really wide windows) so the outside air was circulating around us. We also had a fireplace behind us to keep us warm from the chilly fall air seeping into the dining room as it turned into evening. Lesson learned: start bringing a jacket, coat, whatever when dining out for dinner.

We started the night off with drinks. If I could go back in time, I would have said no to the cocktails and ordered wine instead. The progression of the dishes just felt like they paired better with wine over cocktails. FYI, they have seltzer water/club soda if that’s your jam.

I’m not sure if the menu changes regularly but I began my dinner with the butternut squash + carrot soup. It was surprisingly light considering it was a tiny bit viscous. To me, it was like they put all of the comforting fall flavors in a cup. Would highly recommend trying this.

No pictures of the naan but it was the fluffiest naan I ever had in my life. Would suggest ordering that too.

Unfortunately, I didn’t get to try the dishes above other than the soup (we did not share this time around) so I can’t say my thoughts about them.

For my entree, I ordered the shrimp balchao because it was a dish I never had before. Side note: I am not well versed in Indian food, and I always order lamb vindaloo since it’s just something I know I like. Anyways, the veggies were cooked perfectly. They seemed like they were steamed (correct me if I am wrong) and then tossed in a coconut, lime, chili, tamarind, cardamom sauce. That was absolutely my favorite part of the dish. Not too salty and i could taste the bright flavor of the lime mixing with the sweetness of the tamarind. The shrimps were jumbo however they were overly salty and tough to bite into. I couldn’t tell if they were dry or not because of the sauce. I would order this dish again but tell them to lay low on salting the shrimps.

They do have a dessert menu if you have a sweet tooth. Did someone say sorbet and ice cream?

I’d come back to Peerce’s if I lived north of Baltimore city, if I was visiting a friend around there, or passing by the area. It’s also a good spot to celebrate someone’s birthday especially if you can snag an outside table. FYI, the outside patio area is beautiful and romantic. Lots of plants, string lights, and tables that are socially distanced correctly (because ya know, covid times). Also, the fire pits are a huge plus.

Have you been to Peerce’s? What dishes would you recommend?